There are probably about 10 or so people in this world that can finish that quote verbatim, no assistance whatsoever.
It's probably - nay, certainly - the most famous quote spoken in FBBC's Dorm 230 during my two years there (1997-98 school year; 1998-1999 school year*). 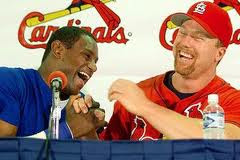 In the early part of the fall semester of 1998, the famous
Major League Baseball home run record chase was in it's full glory. This was the race between first baseman Mark McGwire of the St. Louis Cardinals and right fielder Sammy Sosa of the Chicago Cubs that resulted in both players breaking Roger Maris's long-standing and highly coveted record of 61 home runs (62 home runs needed to break the record). [Side note: McGwire broke Maris's record on September 8 against the Cubs and finished with 70 home runs. Sosa finished with 66. Barry Bonds now holds the record, after hitting 73 home runs during the 2001 season. See: http://en.wikipedia.org/wiki/1998_Major_League_Baseball_home_run_record_chase

Well, this memory must have been from just before or just after September 8th. On a typical afternoon several of us dorm guys were sitting in room #1. This was the room of Brian Peterson, Mike Meyers, Brent Fincham and Travis Brogden (I think). I know Chris Ellis was also in the room along with myself, possibly Jared Johnston and a few others, along with the guy who is the focus of the story -- we'll just call him "Driftwood."
We were just having a friendly chat about baseball. Someone in the room must have been a Cardinals fan because there were some pictures of Mark McGwire up in the room, and even (I think) a border along a window made up of small pictures of either McGwire or Sosa - one for every home run they (respectively) hit. I say that because it explains why someone may engage in a discussion about McGwire and or Sosa.
So we had a standard back-and-forth banter about all our views on the issues. There was a lull in the conversation, and a moment of 10-20 seconds of silence. That's when Driftwood decided to add this gem:

The silence was deafening.

After what seemed like an eternity, I remember Brent Fincham being the first to speak up: "You didn't really finish your thought there, Driftwood . . . pretty much no point in talking at all."

I think I was laughing on the inside so hard that I just got up and left at that point. If you were there, please add to my memory by leaving a comment.

(* For the sake of full disclosure, I should point out that I technically only lived in Dorm 230 for 3 semesters, as I transferred from FBBC to Iowa State for one semester - Fall of 1998 - and then transferred back to FBBC for the Spring 1999 semester. I did visit quite often during that term though, and had lots of friends there. It was during one of these visits that this episode took place.)
Posted by dugroz at 1:02 PM

Email ThisBlogThis!Share to TwitterShare to FacebookShare to Pinterest
Labels: College