Duso the Dolphin (Or is it Do-so?)

At Horace Mann Elementary School, we had a guidance counselor. I think her name was Mrs. Shelby, but don't hold me to that.

I have a gut feeling that guidance counselors are different now than they were in the 1980's (and very early 90's). I only remember going to her once, because math was hard and I didn't want to be in the advanced group. Not sure why that involves the guidance counselor...

ANYHOW, we learned important life lessons from a puppet named Duso the Dolphin (Although that spelling was found on a quick google search, I always thought it was Do-so) and his other puppet colleagues. Things like sharing, how to not fight, how to not use bad words, how to stand in line, why policemen are nice, etc. 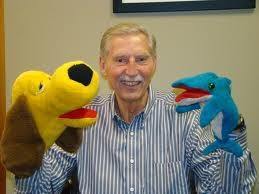 (I have no idea who this man is, I just found the picture on a google images search, and it pretty much matched my memory.)

In early elementary, we would watch the puppet shows and learn from them. 6th graders would help "run" the other puppets (the guidance counselor would be Duso, and 6th graders would be the "friends" - a dog, a flamingo (?), maybe a fish??? some other animals???)

Here is where the story gets Awesome -- In 6th grade, I was asked to be one of the puppet helpers!!! I know, you are jealous.