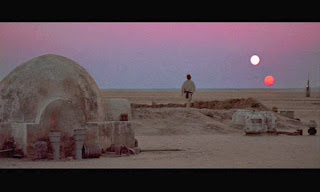 Today is May the 4th. So, "May the fourth be with you!!!" -- This isn't going to be my typical blog entry, I'm going to go full on nerd. So, if that's not your thing, you may want to go back to Facebook now.


First, credit where credit is due: almost all of this concept is drawn from this web site.

Yes, revolutionary. Perhaps a bit hard to accept at first. But ask yourself this question: Is there anything in Episode I that is exclusively critical to understand the greater Stars Wars saga? I say "no."

I had to let that sink in for a bit myself. The Phantom Menace (Episode I) is my least favorite of all the movies, however, I have always thought that it does have some redeeming value. The major redeeming value is the movement and manipulation that shows how Palpatine came to power. (I still contend that Palpatine is the "menace" in the title though some disagree.) Pretty cool that he started a war - and it didn't even matter who won - just so he could become the chancellor, but I digress. Do you truly need to know how he became the chancellor to appreciate the rest of the story? No, no more than you need to know why Han Solo became a smuggler to appreciate his role in IV-VI.

What about how Anakin left his home and his mother? What about Qui-Gon? Why did Anakin get chosen? Well, I don't think you need to go into any of those things to understand the arc of Star Wars. After all, we know nothing of how Obi-Wan became a Jedi, and how he spent his childhood. Focusing on the relationship between Obi-Wan and Anakin is far more important, and that hardly even starts in Ep. I.

Then there's all the other stuff: The podrace, Amidala/Padme changing clothes & identities, Jar Jar, Messed up Yoda, the Gungan city -- all fluffy tripe that I'm glad to do away with.

Sure, I'll miss the duel of the fates and that epicness, but the thing that has bothered me the most is that Episode I just doesn't seem to fit. It's like someone wrote a precursor to the prequels. Sure, it has a few cool scenes and sets the stage a bit, but it's not a "part of the whole story." If a noobie watches the other 5 episodes and loves them, he or she can then go back and pick up Episode I as a "stand alone" movie set in the Star Wars universe

"What's with the messed up order?"

There are problems with watching in both release order and chronological order.

Chronological order: So you start out knowing that Anakin turns into Vader before you even enter the original trilogy. There is no build up/big reveal. You lose the charm of meeting Obi-Wan and Yoda with the veil of mystery. Also, if waching with a noob, you may lose them by showing the poorest (story-wise) films first.

Release Order: You end on a major downer. You thought the end of Empire was a downer? Try Revenge: the last thing you see is Anakin turing into Vader, Padme dying, most of the good guys getting slaughtered, the baddest guy taking over the universe, and Obi-Wan & Yoda accepting soul-crushing defeat and going into exile.

The machete order gives you the introduction to the characters and the universe, starts off very well, and leaves the viewer feeling like he or she wants to see more. Just when "No, I am your father" [oft misquoted] comes along, and you wonder, "Is Vader really his father? ... why does Vader seem to despise old Ben? etc.," you are given a 4 hour flashback that answers your question. Then you come back to "present day," see how it wraps up, how the Luke-Vader relationship is redeemed, and everybody is happy! (As an added bonus, it makes the look-at-different-planets end to Ep. VI from the Special Edition suddenly seem relevant.) 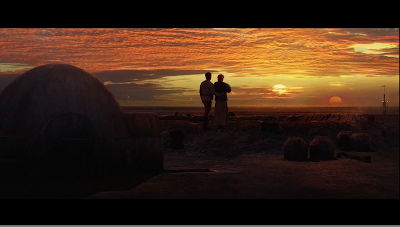 The machette order isn't perfect, but when thinking of the net of gains minus flaws, it's the winner for me.


Side note, for being the biggest Star Wars fan I know, I've never watched more than 2 of the movies in consecutive order. I know in high school my buddies and I planned to. I have a very vague memory of going to (I think) Thom Hennen's house and I walked in part-way though A New Hope and stayed to watch Empire, but that's as close as I got. With a wife and kids, I don't see any 10+ hour marathons in my near future, but perhaps if I'm left home alone for some weekend this summer, it may happen.