During the summer of 1995, before my junior year of high school, I got my first car, and therefore, my first license plate: 426 CWI. 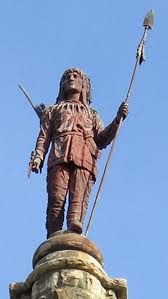 Since that time, I traded in my Blue '88 Pontiac Grand Am for a Green '99 Buick Century (shortly before our wedding in 2001), and subsequently traded that in for our present Brown '06 Buick Rendezvou (shortly before the boys were born in 2008). In both cases, the license plate was taken off the old vehicle and put straight onto the new one.

So, even though I haven't lived in Wapello county since August of 1997, I've had "WAPELLO" on my license plate as long as I've had a car. I even remember when I moved off campus in the 2000-01 school year, and I became an "official" Polk county resident, I called the Wapello county courthouse. "Just send the car registration form & payment to us, and we'll automatically forward the registration to Polk county next year." So, even though the registration paperwork and the sticker came from Polk county each year, the license plate itself remained the same.

It seems like about 3-4 times every year, I would have someone ask me, "are you from Wapello county?" or, "are you from Ottumwa?" I didn't mind; in fact, it was kind of fun. I think this is how I found out that a couple in my church (Ray & Jeanne Taylor) used to live in Ottumwa; also, when we bought Ben & Joe's mattresses just back in March, the manager of Mattress Discounter in Des Moines told me that his folks used to own a furniture store in Ottumwa, because he saw the license plate.

However, it all came to an end.

My birthday is in March, so my car registrations are always due by the end of April. After paying this year, and without warning, two new license plates unceremoniously showed up in the mail box. This is the "newer" kind with the more reflective surface and without the raised numbers & letters. Oddly, it is now in the letters-then-numbers format instead of the numbers-then-letters format.