Our Hearts Were Young (Are They Still?) 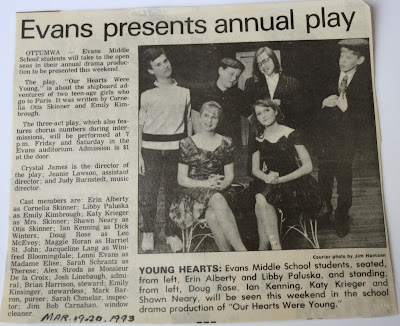 Can you guess what was 20 years ago today?

The script was actually titled Our Hearts Were Young and Gay, as was the namesake of the original book from 1942. In order to prevent a large heap of middle school giggles, the directors truncated the "and Gay" portion.


The plot, as I remember it, is as follows: Two girls, Cornelia (Erin Alberty) and Emily (Libby Paluska) get on a boat to go to France. One girl's parents may have been with her (Shawn Neary as "the dad" and Katy Krieger as "the mom"). They meet two guys, Dick (Ian Kenning) and Leo (myself). While on board they meet a boisterous French man (Alex Stroda) and a host of crew members (Mark Barron, Josh Linebaugh, Sarah Chmelar, Brian Harrison, Emily Kinsinger, Sarah Schrantz, Jim Bob Carnahan, and others I may be missing).

I know it sounds a little funny to sum up the plot as "wackiness ensues," but that's because I genuinely don't remember any actual plot. There probably was a thin plot in there somewhere, but when you are in a play, you never actually get to watch the whole play. I do know there were some specific events:

- Leo (me) at some point runs into the stewardess (Emily K.) [in a literal sense]


- The two "couples" enter some kind of card-playing tournament. When it comes to playing cards, Leo is thoroughly impressed with Cornelia, and declares that she is "wonderful!"

Well, that's about it for my memory of how the play actually goes. I'm sure there is some kind of conflict and resolution. If anyone knows what they are, feel free to share.

Of course, one awkward moment stand out head and shoulders above all others.


There was a scene where Erin and I were supposed to have some kind of cheesy moment, and just as I lean in, about to give her a kiss on the cheek, Ian and [someone? maybe Libby] were supposed to barge in and interrupt the moment. Erin had said that if something ever went wrong, or there was a delay, she would fake slap me to prevent actual contact [something that seems plausible in the 1920's].

Well, the senior citizen's matinee, student performance, and Friday night performance all went fine; but on the final night, there was a very large delay, and after what felt like a long delay (but was probably only a couple seconds), I leaned in, anticipating the stage slap that was coming . . . but it never happened, and I actually did kiss her on the cheek to a lot of hoots and whistles. Erin turned as red as a tomato with embarrassment and THEN Ian barged in. I later found out that Ian delayed his entrance on purpose to mildly humiliate me.

There was a lot of down time - since, of course, not everyone was in every scene - so there were plenty of opportunities to wander the school with minimal supervision, have fun, ride the elevator, (normally not allowed!) etc. I also remember hanging out with friends on the light & sound crew during these down moments, including Peter Hemmings, Scott Hecker, Sarah Burke, et al.


Footnote: Most of these pictures were taken on my Kodak "Disc" camera, where the film was actually shaped like a disk . . . it was horribly inefficient, and could only take like 12 pictures per disk, but for some reason I liked it. It was the same camera I took on the 8th grade Washington D.C. trip. I'm sure there were a lot more pictures, but for whatever reason, these were the only ones found in a box recently. If you have pictures, please send them to me and I'll gladly add some!
Posted by dugroz at 6:54 AM

Email ThisBlogThis!Share to TwitterShare to FacebookShare to Pinterest
Labels: Evans