My "Day in Court" 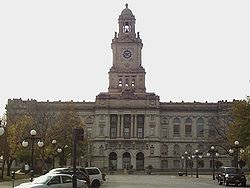 I had the cruise control set on 71 mph, and was moving along nicely with the flow of traffic. I was the schlub who forgot to slam on his breaks, so I was the one who got the short straw. I admit it, guilty as charged. $181.50 speeding ticket, dutifully paid to the city of Des Moines.

But, that's all boring stuff. Here's the more interesting part of the story:

You're supposed to carry your proof of insurance in your car at all times, of course. Well, a few days before I had printed off new insurance cards . . . and dutifully left them sitting on the bookshelf at home.

So, in addition to the $181.50 ticket, I was also given a citation for "VIOLATION -- FINANCIAL LIABILITY COVERAGE." The charge? Approx. $385.00 -- ouch! Fortunately, the officer let me know that if I "go down to the Courthouse" sometime after the new year, I could "get it taken care of."

Well, based on that vague description, I wasn't really exactly sure what to expect, but, if it meant eliminating - or at least reducing - a $385 ticket, I was sure going to try!

I checked the Polk County Courthouse website (which I think was last designed around 1997), which had zero information on the topic. A call to the general courthouse phone number was slightly more informative, with a one line statement like "just come during normal hours and we'll get you in."

So, on the 3rd, I drove down there (I wanted to avoid the 2nd, because it was the first business day of the year and I figured pretty busy). Not knowing how long this would be, I put enough change in the parking meter to last me an hour and a half.

The courthouse is a secured building, so you have to go through a security line, much like an airport. After that, I walked up to what looked like an information kiosk, and asked the lady where to go for my situation. She just got my name and the date of the ticket, and then rummaged through a large stack of documents, pulled one out, and handed it to another worker who took it to who-knows-where. "OK, just go to that room right there [pointed]. When you go in, just sit quietly in any chair and wait for your name to be called."

[At this point, it may be fun to play the MATLOCK theme song!]

It's always fun in life to be told to do something when you have no idea exactly what that "thing" is. The door said, "JUDGE SO-AND-SO" on it. Am I going into an office? A courtroom? Some kind of classroom where they teach me about the real dangers of driving without your insurance card? If I cannot afford a lawyer, will one be provided for me? I didn't want to go in unprepared, so I went to the bathroom first -- you know, just in case this was going to be a long time.

When I went in, it was obviously a small court room. There was a big important looking desk and then a smaller, less important looking desk in front of and below it. There were only two people in the room, both female, one sat at the "lesser" desk (this must be the judge, but apparently she uses the "little" desk and doesn't wear a robe for these minor traffic proceedings) and one was off to the side (probably the court recorder?). Within two seconds, before I could even get to the nearest seat and put my papers down, the off-to-the-side lady said, "Remove your hat!" Oh man, I'm in trouble already! I mean, I'm a good boy, I know men are supposed to remove their hats indoors... my hands were just full! And the receptionist said to sit down quietly and wait for my name to be called; I was trying to obey!!! "Yes... sorry!" I said.

"DOUGLAS ROSE?" said the front lady, one second after I sat down. (Which I find kind of amusing as I was the only non-courthouse person in the room.)

I sheepishly walk to the front.

"Front Lady" walks up to the side of the "big desk" and disappears into a side room for what feels like 5 minutes. This must be the mythical "chambers." I was really nervous, so it may have been 30 seconds. In hindsight, I'm guessing she was some kind of Clerk-Of-Court. But who could blame me for assuming she was a judge? The name on the door was for a female judge, and she was the only "up fronter," after all.

She comes back out and says, "The judge [Judge who?] has decided to drop the charges. You will still have to pay the court costs. Are you going to pay those right now or online?"
"Uh.... [ not knowing how much that is] online?"
"OK, take one of those papers and pay your ticket and court costs by the 12th. You're all done."

Alright, well, that's that. In case you wonder, the "court costs" part of the citation was $60. A $325 reduction in the fine was definitely worth the inconvenience of my little adventure, but still a pretty expensive reminder to put that piece of paper in your car!

Well, I've still got over an hour on my parking meter, so might as well look around the courthouse... never been in it before! It's a pretty cool building.... dating from 1906. 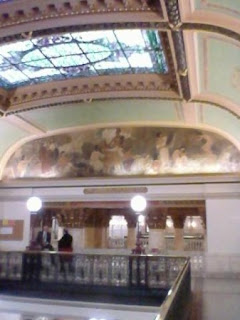 "The White Man Meets the Indian" 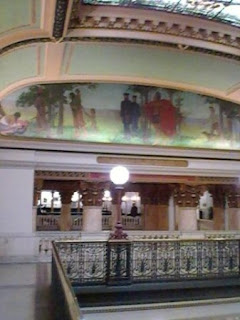 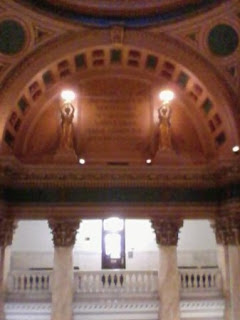 
There were also quite a few fellows of the baser (looking) sort hanging around on benches waiting for something or another. I presume most of them were either accused of something, or parolees who had to appear in court for one reason or another. There were also a lot of lawyers wandering about. No surprise there, I guess.

When I paid my fines online a couple days later, I found out that the mysterious judge in the chamber who waived the charges was The Honorable William A. Price. Thanks, Judge Price! [This still doesn't explain why the name on the door was that of a female judge, however. Perhaps some mysteries are best left unsolved.]

Email ThisBlogThis!Share to TwitterShare to FacebookShare to Pinterest
Labels: Post-Marriage