Found these guys in my parent's basement last week -- 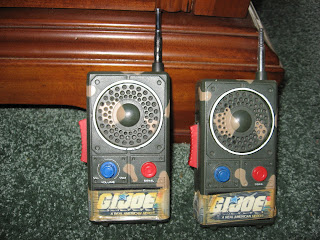 I know I had these at least by 3rd grade (maybe before) because there was another student at Horace Mann that had the same ones. I think he only went to school there for a couple years. I want to say his name was Charlie, but I'm not sure on that. 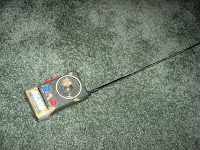 Notice the very convenient (and safe for kids!) pull-out antenna. If I remember, they were functional, but only had a range of about 50 yards, so not all that practical for any of the secret missions that 3rd grade boys would need to have. 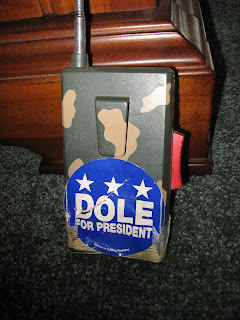 At some point the "Dole for President" sticker was added to the back of one unit. This must have been much later, as he ran in the 1996 election.

My wife has encouraged me many times to take a picture of something and then throw it away if it's "moderately sentimental . . ." and that's what I did here.
Posted by dugroz at 5:09 AM